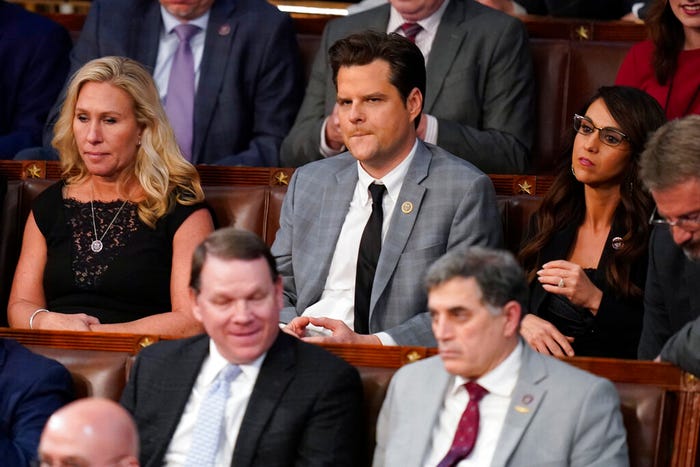 During the vast majority of the House speaker roll call votes, Gaetz chose to back an array of conservative alternatives to Rep. Kevin McCarthy.

During Kevin McCarthy’s protracted battle to secure the speakership in the new Republican-controlled House of Representatives, Rep. Matt Gaetz of Florida — known for his close alliance with former President Donald Trump — was one of the California Republican’s most prominent intraparty detractors.

Gaetz came into the original January 3 vote seeking new leadership, which he expressed through a succession of speaker votes cast for Reps. Andy Biggs of Arizona, Byron Donalds of Florida, Kevin Hern of Oklahoma, and Jim Jordan of Ohio — along with a vote cast for Trump — from the first through the 13th speaker ballots.

For most of the past week, Gaetz continually lit into McCarthy, at one point calling him “the LeBron James of special interest fundraising” in Washington, while also questioning why he was putting the House through so many rounds of votes only to come up short in the tallies.

However, by the 14th ballot — when the vast majority of the conservative holdouts had finally moved behind McCarthy — Gaetz shifted his vote from Jordan and instead recorded himself as “present.”

While the move represented a breakthrough for Gaetz, it generated anger from many members within the larger caucus as McCarthy remained one vote shy of winning the speaker’s gavel. Rep. Mike Rogers of Alabama after the 14th round of voting then confronted Gaetz and appeared to lunge at the Floridian over the vote.

By voting “present” in the 15th and final roll call vote, Gaetz and other Republicans still critical of McCarthy — including Biggs, Lauren Boebert of Colorado, Eli Crane of Arizona, Bob Good of Virginia, and Matt Rosendale of Montana — lowered the numerical threshold for victory and allowed the Californian to win the speakership 216-212 over House Democratic leader Hakeem Jeffries of New York.

When Gaetz was asked by CNN what prompted him to change his strategy of backing conservative challengers to McCarthy, the Florida lawmaker said he “ran out” of additional concessions to ask of leadership.

“I ran out of things I could even imagine to ask for,” he told the news outlet.

CNN reported that Gaetz on Monday had asked McCarthy to chair a House Armed Services subcommittee, but the GOP leader had declined the request.

In the earliest stages of the voting process to select a new speaker, McCarthy struggled to consolidate the support of roughly 20 conservatives and earned fewer votes than Jeffries.

With the Republican Party’s razor-thin 222-212 edge over the Democrats, McCarthy couldn’t afford to lose more than a few members, a predicament that gave the ultraconservative House Freedom Caucus enormous leverage with leadership as they sought to agree on terms that would guide the new majority.

The proposed GOP rules package would afford one member the ability to force a “motion to vacate” the speaker, while also making it tougher for the House to raise taxes or the debt limit. And the new rules would also empower conservatives in the lower chamber, giving them more representation on critical congressional committees.

Source: Gaetz on House Speaker Vote Flip: ‘I Ran Out of Things’ to Ask for

Biden Bumbles Through G7 Summit, Leaving A Trail Of Gaffes In His Wake

This site uses Akismet to reduce spam. Learn how your comment data is processed.

Donate to Keep us running

Donations help keep this website running. You can donate any amount, no amount too small. Thank you!